I have been thinking a lot about Karolina since I got back. The experience of honoring her and other relatives was emotionally charged. Meeting new family and friends was life-changing.

In the meantime, here are a few things in one place:

The story in a nutshell: video by my cousin Natasha Kirtchuk

Some background info in Ynetnews

You can find me in some photographs here:

My sister, Jackie Bruckman Rednour, is quoted in Time Magazine

Other wonderful articles in: The Washington Post, CBC, Reuters, and many others

For some amazing family survival stories, as told by my “Uncle” Ernie, please see my cousin Sonya Heineman Kunkel’s blog 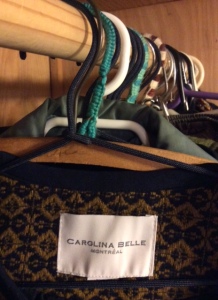 I am flying to Frankfurt, Germany in three days to partake in a major public ceremony honouring my relative, Karoline Cohn, a young girl murdered by the Nazis seventy-four years ago in Sobibor, an extermination camp in Poland.

“Hi Cuz! Please see the article on my FB page. I was contacted by a researcher from Israel. Short story is we are related to the girl who owned the pendant!”

Dan Bilefsky writes in this article that “as Karoline, 14, walked the final steps to the gas chambers, most likely unaware that she was about to be killed, she dropped a pendant engraved with the words ‘good luck’ in Hebrew through the wooden floorboards.”

If you ask me why I write, one reason, if I’m going to be honest here, is that I want to be remembered. I think we all do. So I believe that Karoline knew that she was about to be killed and wanted to be remembered. When she dropped the pendant through the floorboards of the so-called “road to heaven”, it was like her final act of defiance against the evil that tried to erase her.

Peter Feldmann, the mayor of Frankfurt, will be at the ceremony. He is the first Jewish mayor elected to a major German city since World War II. When I saw his name on the program, I took a look at my dilapidated wardrobe. I own tee-shirts and blue jeans, mostly.

Yesterday, I went clothes shopping. I tried on a jacket, and I felt really beautiful in it. I looked at the label: “Carolina Belle”, and smiled.

“Beautiful Karoline,” I said out loud, in the small, dimly-lit dressing room. “I know you’re here.” It was as if Karoline was prompting me to buy this jacket, get myself to Frankfurt, and together, with extended family members flying in from all over the world, declare, “She was a girl. She has a name. Her life mattered.”

I have a funny feeling that Karoline will try to speak to me again.